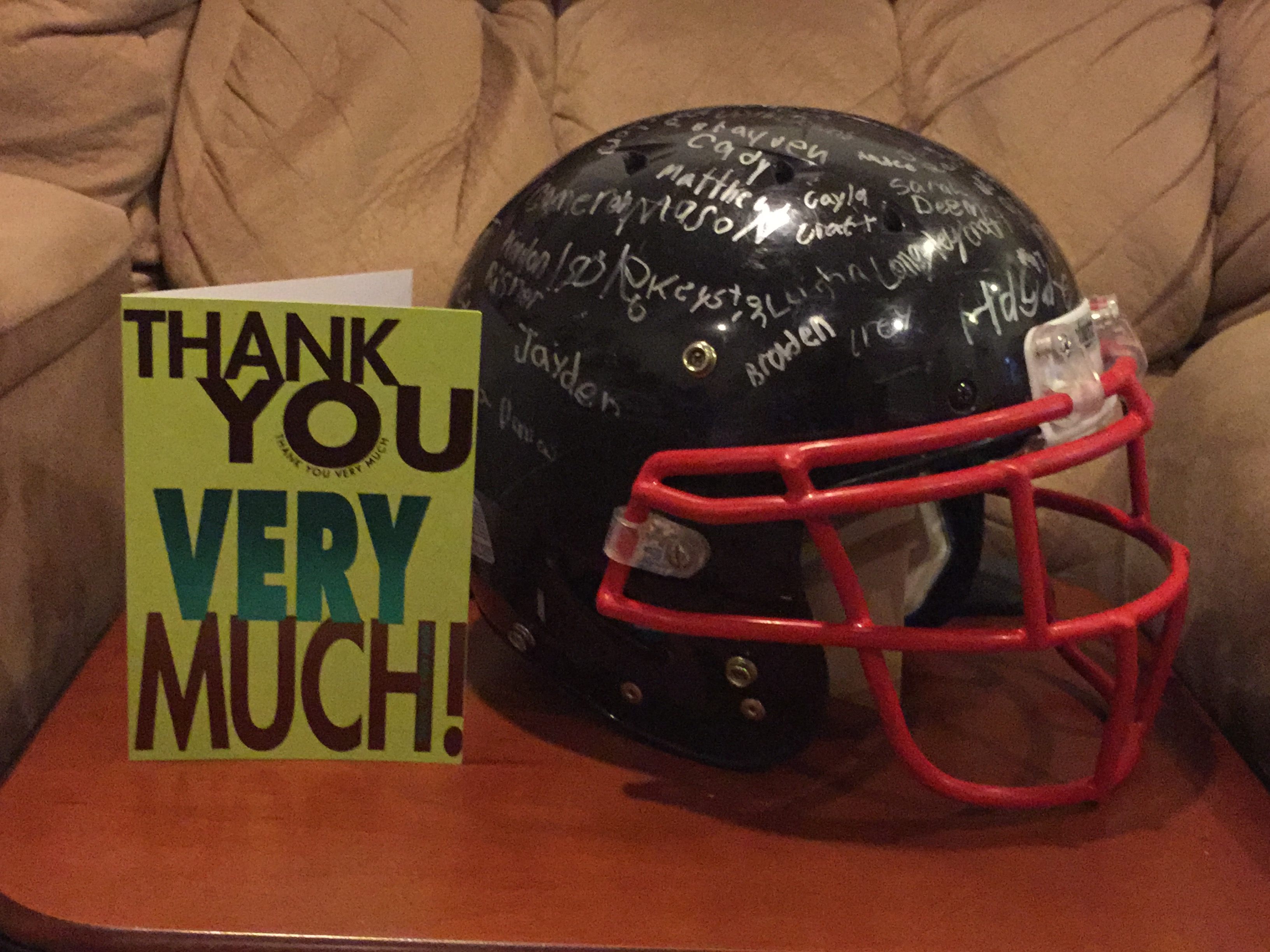 The football season has come to an end for almost everyone and a lot of football teams are currently hosting their awards banquet. It is a time where athletes, coaches, and parents get together for one last time to celebrate and reminisce about the past season. This is an ideal time for the players and parents to thank the coaching staff for all the hard work they have done during the season and/or previous years.

Everyone knows by now coaches don’t do it for the money, they do it for the “Priceless” moments. A lot of people might not realize how much time goes into coaching and how much actual time a coach spends with the players. Some coaches will see players more than maybe even their own spouse or family during a football season. Youth coaches especially are ones that have the “Coach Bus” rolling out before or after a practice or game to take a player home because their parents aren’t able to get them there due to prior commitments. It is important to remember that a majority of youth coaches not only volunteer but are sometimes the head coach, coordinator, assistant coach, water person, breakdown film, team mom, and med staff! Youth teams usually have one volunteer coach because it is hard for most people to find the time to coach or they are not comfortable with coaching.

Especially at the High School level, coaches spend countless hours with a lack of sleep preparing for the next opponent. Let alone the many other behind the scene duties that go on all year long, not just during the season, like making sure the athletes stay eligible in class or make it to the weight room to stay in shape. No matter what position a coach holds on the team: the head coach, coordinator, or an assistant, they each play an integral role of the staff. The majority of coaches are most likely already starting to prepare for the next season. The difference is most of these coaches only get a small stipend to coach for a whole year, not just a season, and then you have some coaches on the staff that volunteer because most schools don’t have enough stipends for the size staff needed to coach a high school team.

As the awards banquet approaches, take a moment to thank the coaches that impacted your child’s life for the past months or years.

Thank You Examples – from an individual or group

These are just some ideas for different thank you gifts you can give the coaches at the awards banquet or during the holiday season. Also, be thankful that you have someone that builds player confidence and takes the time to invest in his or her future.

This week I personally received a gift that made me say, “Wow, this is an awesome gift!” It was completely unexpected. I want to personally thank Coach Doug Cady & the Knox Pop Warner teams for this thank you gift for doing a Youth Camp in August.

It is important to take time to acknowledge the impact a coach has on their athletes and the time they invest in them. A team will spend more time together during both the season and off-season than they do with their own family that is why the bond they share becomes that of a family, a Football Family!

I want to personally thank all of the coaches that have coached me as a player, coached against me, or coached with me. Without them I wouldn’t be where I am today.
#FootballFamily
#ILoveFootball

Anthony Stone is a Physical Education teacher at Gregory Elementary School and Quarterbacks Coach at Boylan High School in Rockford, IL. He is also the Defensive Coordinator and Assistant Head Coach for the Women’s Australian National Outback 2017 Team. In July, he was named to the Hudl Top 100 list. He has presented at IAPHERD, the top physical education convention in the state of IL, on how to get students moving with his Games Galore presentations. He has also presented at the Chicago Glazier Clinics on Quarterbacks & Special Teams. He was the Defensive Coordinator for the 2010 U.S. Women’s National Tackle Football Team, winners of the IFAF Women’s World Championship in which Team USA did not allow a point in three games with an overall score of 201-0. It is still a record. Stone has coached in the CIFL and the IWFL League as well at Beloit College (Linebackers/Special Teams Coordinator) and Rockford University (Quarterbacks/Wide Receivers). He has coached football at the youth, middle school and high school level as well. He will be putting on fundamental football youth camps around the world in 2017. Follow him on Twitter @Coach_Stone_MT and use #CoachStoneFootball to ask him any questions.