Home » 7on7 Has Evolved From Villain To Savior

7on7 Has Evolved From Villain To Savior 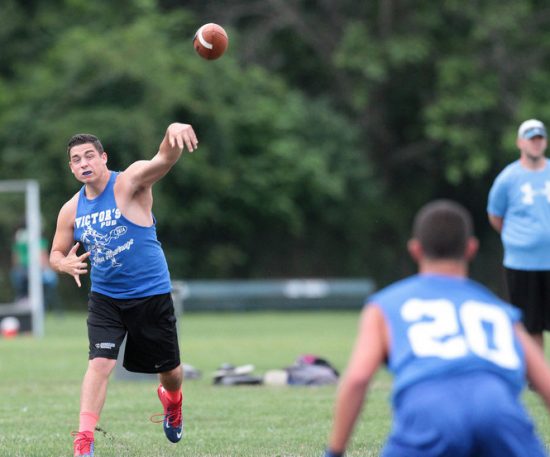 As many coaches and players prepare for some of the biggest 7on7 tournaments across the country we felt like it was a great time to release an edited version of this article we released a few years ago.

I remember the first time I read an article on 7on7. It was maybe ten years ago. I was coaching for the Chicago Bears, trying to figure out why the headline of the article was implying that 7on7 was harmful to the sport of football. I was naively thinking that they were talking about the 7on7 drill that was included in any football practice I had ever been a part of for my entire coaching career. Of course, I soon realized they were talking about the 7on7 tournaments sprouting up across the country in the spring and summer that may or may not be associated with the players’ team that same fall.

The general concern was that some of the people coaching these teams were essentially turning into “Handlers” for the kids and that this might be the first step towards sending football down the same perilous road of basketball with AAU tournaments where outside coaches became involved in the recruiting process.

Additionally, the High School coaches who were interviewed pointed out all of these things and made a valid point about the fact that someone else was coaching and interacting with some of their better players, thus adding to the layers of advice the kids were getting on and off of the field.

As a coach (and recruiter) at several major college football programs in my past, I immediately jumped on board with the idea that 7on7 was not a good thing for football. Years later, I am seeing things a lot differently. I still have concerns over who is teaching what to the 7on7 players during the off season months of the year, but honestly it looks like the quality of coaching is getting better instead of worse as a lot of former professional quarterbacks are getting involved. Also, football scholarships and recruiting – when done correctly – are normally based on football played while in pads, when you can hit and be hit, and therefore the parallels to basketball only go so far.

Related: How NFL Teams Use The RB’s In The Passing Game

Looking at 7on7 football in the year 2019, I see it in an entirely different light. I am seeing quarterback play rebound from a few years ago when it looked like quarterbacks were going to be regulated to exclusively  running the zone read.  Although this style still prevails in the high school and college ranks, here are a few ways we think 7on7 is in great position to help advance the game of football:

If you want to get good at throwing the ball..throw it.

All coaches are fighting to keep their jobs and you have to do what you have to do to win. If running the spread, and the read option game is what gives you the best chance to win and stay employed, then who can blame any coach for going that route?

However, running skills normally come to young players before throwing skills and the odds are that you will find a running quarterback before you find (and develop) a throwing quarterback. Let’s face it, a pimpled face Brady or Brees might not even get the chance to throw it these days if the coach was committed to running a spread read option offense and had the quarterback to do it.

7 on 7 offers a partial solution in a couple of ways. There is no harm or foul if a kid who is maybe your backup quarterback wants to work on his skills during the off-season. He may be a great quarterback who is just beginning to grow into his body and develop into a good thrower. The second reason is that this work may actually develop the young quarterback into a player that convinces you as a coach to adjust your thoughts about what style of offense you want to run.

Playing fast is not conducive to learning.

If you want to play fast on offense and run a play before the defense gets set, then the advantages are obvious but so are the disadvantages for the kids. The players that are showing up in the NFL these days are often times ill equipped to understand, much less execute, the schemes and techniques necessary to play the game at it’s highest level.

The most obvious position where this shows up is at quarterback. 7on7 leagues teach a quarterback how to slow down and see if the middle of the field is open or closed and if it is man or zone coverage. There is actually a “teaching moment” as opposed to a “get to the line and run the next play” moment.

Let’s not underestimate this part of 7on7 because it’s probably the most important.  It’s just fun to throw the football. Fans love high school and college football and rightfully so. The rivalries and excitement of it surpasses the NFL game in many ways.

However, if anyone thinks for one second that the NFL fans are going to come out on Sundays to see quarterbacks get tackled on an option or injured on a weekly basis you’re just wrong. The game of football, at it’s highest level, is strategic after the ball is snapped and after everyone is lined up. When you play the game that way, there is one thing that sets teams apart and that is the quarterback.

The passing game is the most exciting thing about football. Yes, you have to run the football but the NFL is a twelve billion dollar a year business because folks love to see Patrick Mahomes dissect a defense with his arm, not his legs.

So where do the Bradys and Wilsons come from if not their high school programs? This is why the NFL is concerned enough to the point that I expect to see a campaign to support the 7on7 movement in the near future. If the NFL becomes a spread, hurry up, low QB skilled league they will lose fans and money. This is not their business model.

So as the game of football continues it’s ever evolving path it’s important to step back and look at the big picture when it comes to 7on7 football. If it’s something that the kids love to play and it is implemented properly, maybe we should keep an open mind about it.  Because in our opinion, nothing is as important as how we continue to find ways to develop young quarterbacks. If you ask me 7on7 football does exactly that and maybe the villain is going to end up saving the day and the game of football as we know it.