Home » Put Pressure On The Specialists

Put Pressure On The Specialists

As a former kicker and punter, I’ve always known how a good punt return unit or field goal block team can affect a kicker, Now as a coach, I’ve learned how this can really dictate the game on Special Teams.  Coaches at all levels need to understand the importance of putting pressure on the specialists of the opposing team. 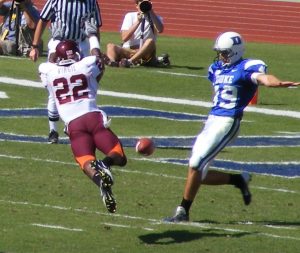 I’ve always thought that a sign of a great football team is the effort of their field goal block unit. How you perform on the next play after giving up a score says a lot about your team. How are you going to respond from giving up that touchdown? Well it starts with showing the opposing team that you won’t stop playing. Most importantly, the specialists have a sense and feel for that unit’s effort. If they know a field goal block unit is bringing it 100% on every play, they have a greater sense of urgency to get the field goal off. This can result in rushing to get a quicker get-off time.

If the get-off times are too quick, it can make the difficulty of the kick much greater…resulting in more missed kicks. There’s a fine line between a great get-off time and being too quick. I always strived to be in the high 1.2 second range. Anything quicker than 1.2 seconds makes the kicker’s job much more difficult. If you have a great push and show an all out effort each and every time your field goal block unit takes the field, you will force the opposing team’s specialists to rush their kicks.

The same is true each time your punt return unit takes the field. Obviously, you need to play sound football making sure that you’re in position to defend a fake, but there’s also a balance between that and putting pressure on the opponents punter. If he has all day back there to get the punt off, it makes his job much easier. This is similar to a quarterback sitting in the pocket and having all the time in the world to throw the ball. In that situation, it’s much easier for him to pick a part a defense and find an open receiver.

Related: Control What You Can Control

For most punters, getting the ball off quickly creates a higher level of difficulty on the punt. This can result in more miss-hits, which gives your punt return unit an advantage. If you study the teams who have the most punt return opportunities at the end of the season, you will most likely see a pattern of those return units consistently putting their opponents on their heels by pressuring their punter. You may not get a blocked kick, but you’re still helping yourself in the long run by putting some pressure on the opposing team’s specialists.